Firewalls are often the first line of defense for an enterprise or home network. In this unit, we will understand the fundamentals of firewalls, write firewall rules that configure its behavior and then test if the firewall performs as expected.

The name firewall is inspired from its physical manifestation in construction which refers to walls that are designed to stop a fire from spreading.

While these firewalls are “cool”, we are interested in a different kind of firewall. Namely, the ones that protect internal networks from external networks. These kinds of firewalls allow us to control the flow of information between networks. Firewalls minimize the number of ways that internal networks and computers on them can be exploited. They also encourage least functionality by turning off ports that are not needed. Firewalls can also drop network traffic that does not conform to expected patterns (such as malicious requests to an application server). 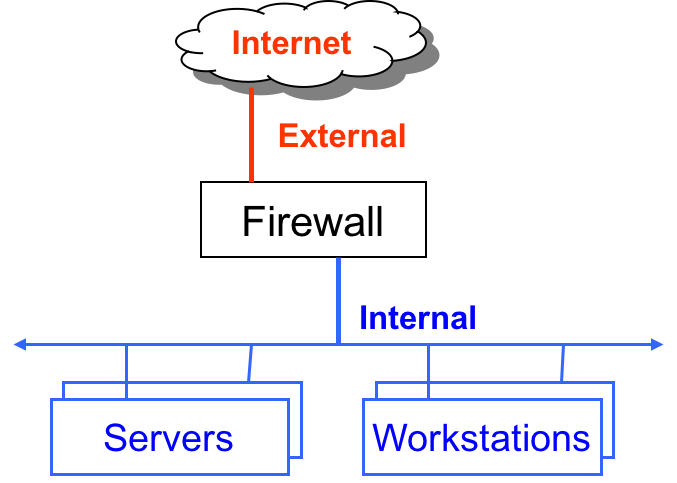 Firewalls aren’t just for networks. Each computer in a network can have its own personal firewall. All popular operating systems now come with a firewall installed. For Windows Server and Desktop installations we will focus on the built-in Windows Firewall with Advanced Security application. This application can be configured with a graphical user interface or the command line interface using netsh or Powershell NetSecurity modules. These options provide a lot of flexibility and control over the configuration of the firewall for personal and enterprise use. 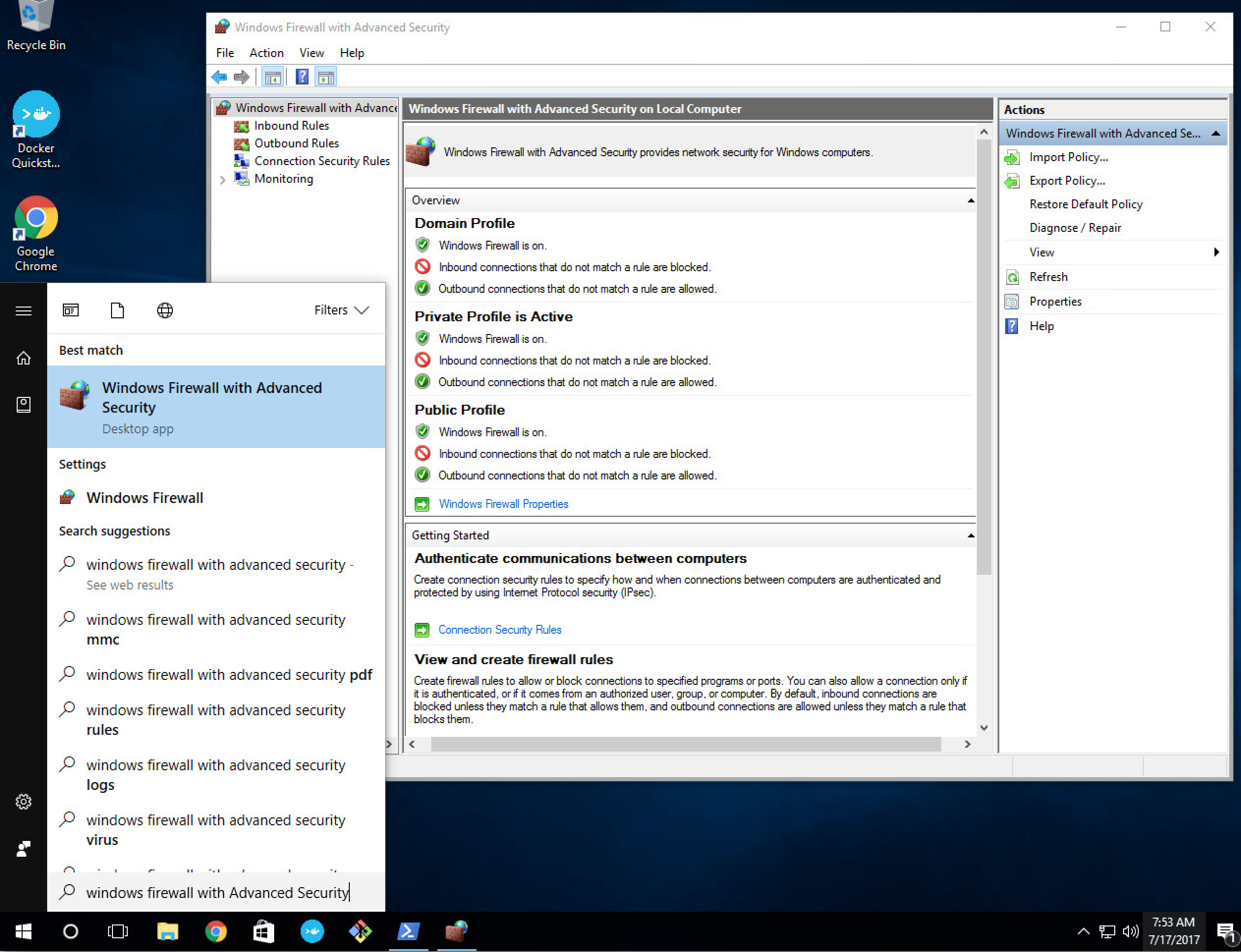 When two machines communicate (such as a client talking to a server), communication spans many different layers. Each of these layers is progressively lower level as you move downward. These layers provide abstractions that show only the necessary details, while reducing the complexity to a set of essential characteristics. In general there are 7 layers:

At which OSI layer does it make the most sense for a firewall to filter the information flowing between two different networks?

Discussion:
The headers on ethernet frames at the Data link layer and below are not useful for routing across networks. Packet filtering Firewalls rules are authored using routing information starting at the Network (also called the IP layer in the TCP/IP implementation) layer and above, all the way to the Application layer. As a result IP layer firewalls are the simplest and most widely used.

Firewall as a Collection of Valves 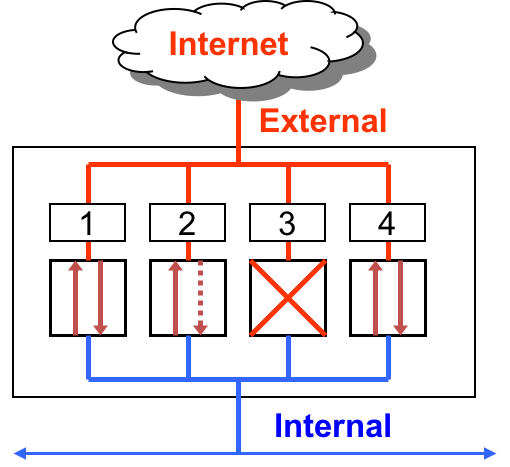 Here are three basic scenarios to keep in mind.

First, lets consider Ports 1 and 4. These ports are open. Which means they permit packets from internal and external sources. So in the case of the TCP protocol, which forms explicit connections or circuits before transmitting data via a handshake mechanism, such connections can be externally or internally initiated.

In the case of Port 2, it allows unrestricted flow of information if the connection is initiated internally. However, it blocks all external requests to initiate an information flow. That is, it permits packets from external sources only if they correspond to a connection initiated by an internal source. The firewall will not permit connection requests from external sources. This restriction is useful when an internal web client initiates a web browsing request, then the firewall will allow the corresponding incoming response from an external webserver to pass through the firewall. Any connection initiated externally will not be allowed.

Finally, Port 3 is closed. Which means that it denies all traffic. A closed port may just drop the packets or send back an RST or “Reset” packet. From a security and resource consumption standpoint, it is always better to just drop the packet. Upon denial of access, no additional or useful information should be communicated back.

Firewalls are configured using simple if then rules. In a packet filtering firewall, a rule says: IF source IP, destination IP, protocol, and local ports and remote ports match a pattern THEN take this action. Since there are many rules involved, the order of the rules matters. A LOT!

Rules are evaluated in order, starting with the first one at the top until a first match is discovered. If your top rule is very generic, i.e. matches almost every packet, then none of the later specific rules will ever be evaluated. So it is best to start with rules that are the most restrictive (i.e rules that focus on to specific services and have a very small chance of interfering with other rules). After ordering by restrictiveness it is then best to order rules according to how well they match the majority of your network traffic. This minimizes the number of checks required to find a matching rule. If block and allow rules do not match, the default policy of the firewall is applied.

Let’s look at an example for exposing a web service over HTTP.

Rule 1 permits externally initiated requests (Direction: inbound) to a webserver behind the firewall. So the source is any, since we cannot anticipate a specific IP address at the time of writing the rule. The destination is the IP address of the webserver and the Local Port specifies the port number where the service is typically hosted. That would be port 80 for a web server. The request may originate from any Remote Port. If these conditions match an incoming packet then the action is accept(allow packet to come in).

Rule 2 permits internal requests (Direction: outbound) out to the Internet. So the source is any IP address of the web server and the Destination is any. The Local Port is 80 (originating port) and Remote Port is any. If a packet matches these conditions then the action is accept (allow packet to go out).

Rule 3 denies all traffic (in any direction). So all match conditions are specified as any and the action is reject. This is Default Deny behavior.

What would happen if we re-ordered these rules? Specifically, if Rule 3 was exchanged with Rule 1.

Let’s play a game that helps us understand firewall rules. These rules are the basic building blocks of a fundamental packet filtering mechanism.

As mentioned before, Windows has a built-in firewall. Depending on the profile (type) of Network your computer is connected to, the firewall can be configured to have a different behavior. Your home network should be assigned the Private profile, while coffee-shop and airport networks are best assigned to the Public profile. Enterprise computers are typically part of a Domain in an enterprise network. For this option, the Domain profile is used. When you bring up the firewall, you will see these profiles listed. You will also see the default policy for inbound and outbound network connections associated with each profile. 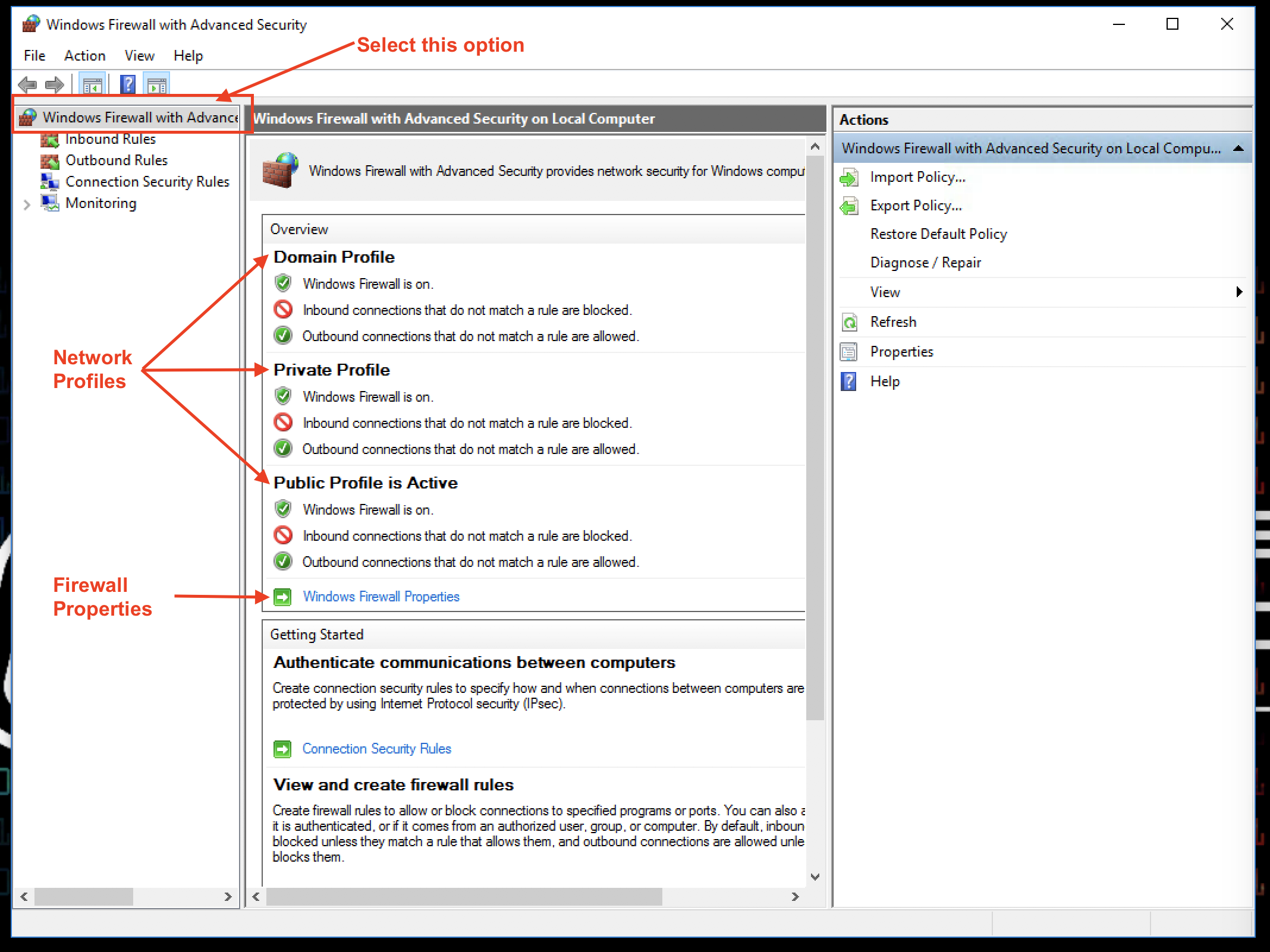 The defaults for Outbound connections go against the fundamental security principle of Default Deny and Whitelisting allowed connections. Let’s go ahead and make it right.

Be ready for many internet connected programs to stop working after this change!

Click on Firewall Properties to view the defaults for all profiles 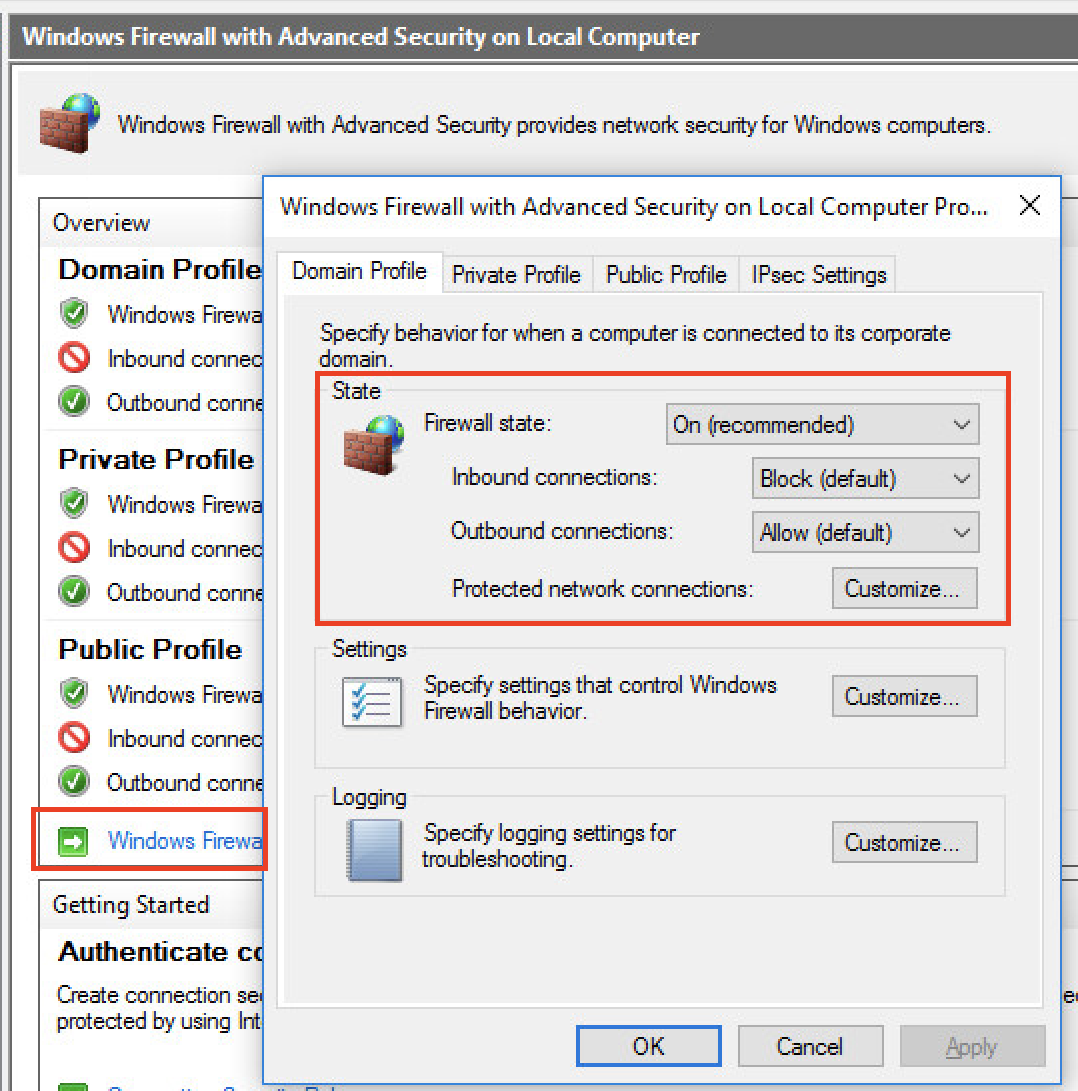 Let’s change the default behavior for Outbound connections to Block.

Repeat the same for Private and Public profiles (tabs). Then hit Apply to save these settings.

We see that all network interfaces are selected. Observe that DockerNAT is also covered.
Hit OK to exit.
Hit OK again to exit the Properties dialog box.

Now the firewall status page should look like this:

Let’s test with Chrome. Open the Chrome browser and see if you can navigate to any website.

The web request fails. Why?

So we need to allow Chrome program through our firewall in the Outbound direction. We want to be very specific to the Program, Ports, and Protocol in our Rule (Cybersecurity First principle: Minimization).

Let’s start to author a new Outbound rule. Select Custom rule to provide the most flexibility. Click Next. 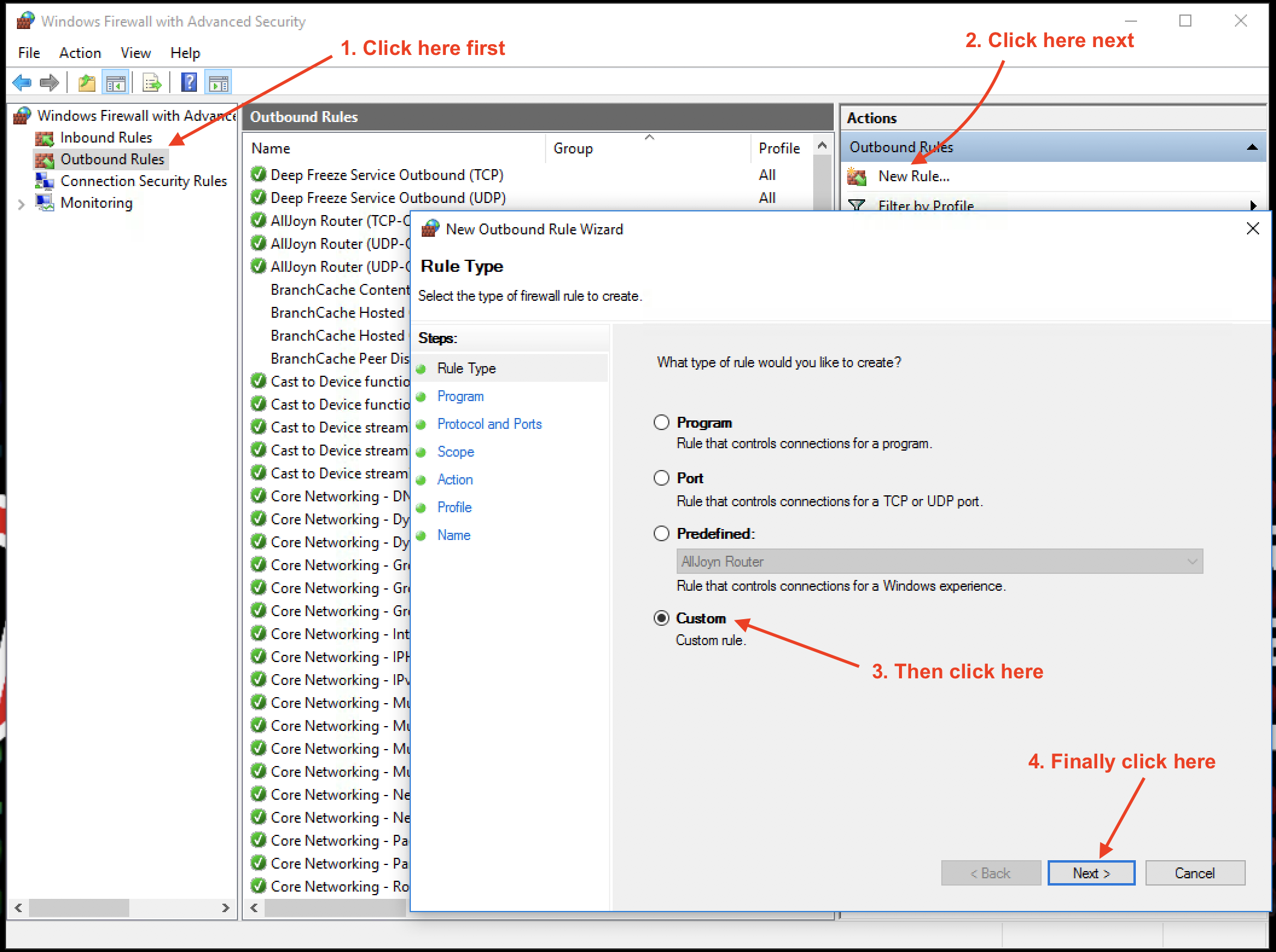 Next, we locate the program that we want to allow through the firewall in the outbound direction. Click the browse button and locate the Chrome executable here: %ProgramFiles%\Google\Chrome\Application\chrome.exe

Click Next. That brings us to Protocols and Ports.
We want Chrome to be able to contact web servers on HTTP (Port 80) and HTTPS (Port 443) services using the TCP protocol.
So adjust the settings as shown: 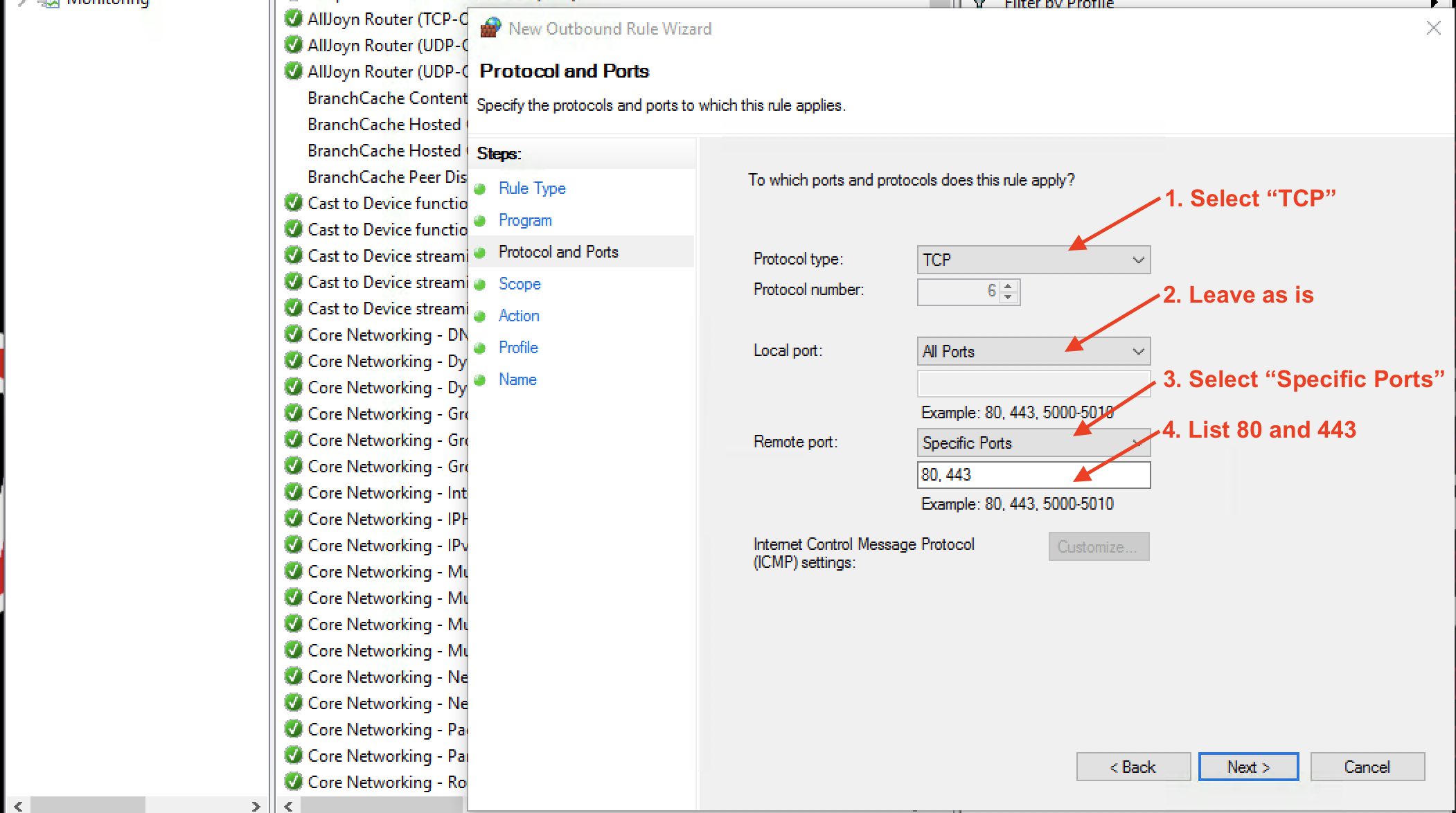 Click Next. We will not limit the connection to specific IP addresses, so we will leave Scope as is.
Click Next again.

Now for Action. Select Allow the connection since we are whitelisting this application. 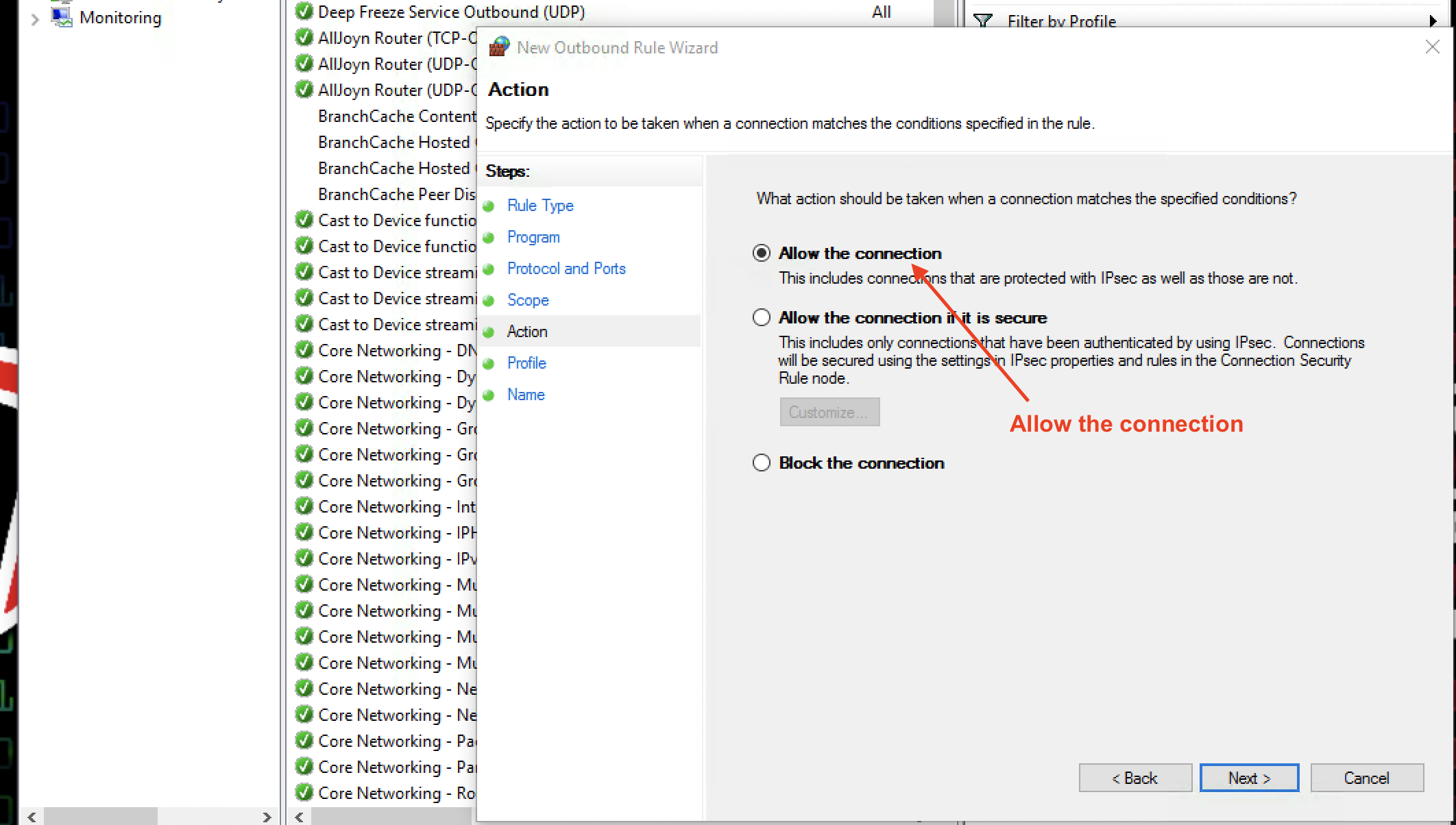 Next, for Profile select all profiles so that the rule applies to all network types.
Finally, provide the rule a Name and Description to identify it later.

Click Finish. The rule is now active and should be listed in the Outbound rules listing.

Now use similar steps as above to add a rule for the same program (Chrome), but allowing protocol UDP for remote port 53. This allows DNS requests to go through. DNS helps with domain name discovery.

Once the UDP rule is added, we are ready to try accessing a website again.

It should work this time. Call the instructor to troubleshoot if are still not able to browse to a website.

If you would like to practice further, firewall configuration with Docker for Windows is available here.

That’s it for Firewalls in this Unit. Happy Surfing.

Firewalls are an essential component of “Defense-in-Depth” strategy. It can certainly slow down an attacker. However, firewalls cannot keep a determined adversary out. There are many ways in which firewalls can be abused and easily bypassed. Such attacks need to be constantly monitored using Intrusion Detection Systems (IDS) and Network Monitoring solutions. The final line of defense is applications built using secure coding practices and proper encryption implementations. This is an example of Layering.

is licensed under a Creative Commons Attribution-NonCommercial-ShareAlike 4.0 International License.

This lesson is licensed by the author under a Creative Commons Attribution-NonCommercial-ShareAlike 4.0 International License.